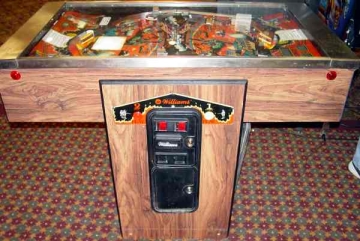 (image courtesy of pinballrebel.com, because i forgot my camera and my cell phone was dead)
Jalen and I headed down to the Jefferson County Fairgrounds today for the Rocky Mountain Pinball Showdown 2007, and man, did we have a blast.
Imagine if you will over 100 of mostly-showroom quality pinball machines from the last 50 years with unlimited free play and no lines (well, there was a bit of waiting to get on the Addams Family machine, but that was somewhat expected as it’s THE BEST PINBALL GAME OF ALL TIME). It was heavenly.
In addition to such classics as Fireball, Centaur (which has some really cool speech synthesis and artwork that totally freaked me out as a kid) and Xenon, they also had this amazing Joust cocktail machine where you could play head-to-head pinball! Apparently these were prototypes, less than 500 were made. I can see why — there’s long periods of the game when all the balls are on one side of the machine, leaving the other player to just umm, twiddle their thumbs as it were, but the concept is so cool it’s a shame they didn’t mass-produce these.
Also got an opportunity to play some vintage wood-rail pinball machines such as Yuma (released in 1950) and Scuba (released in 1970). Gameplay is a lot slower than on “modern” machines, but the sounds, feel and even “smell” of some of these electromechanical games is very charming. What was amazing about these games in particular was how little pinball machines had advanced in those 20 years.
We also saw the Alexander clan – Dave, Erin, Daphne and Hunter were there. I had a feeling I might see Dave, it was cool to see everyone again, haven’t seen them since we went camping at the Sand Dunes last spring.
I have to say, once we’re in a living situation where we can have a rec room, we’re gonna have to get a pinball machine.