So, I saw this news article today: Breast implants linked with suicide in study, which goes on to state:

Women who get cosmetic breast implants are nearly three times as likely to commit suicide as other women, U.S. researchers reported on Wednesday.
The study, published in the Annals of Plastic Surgery, reinforces several others that have shown women who have breast enlargements have higher suicide risks.

Reading this, I immediately thought of Angela Devi. Here’s a picture of her: 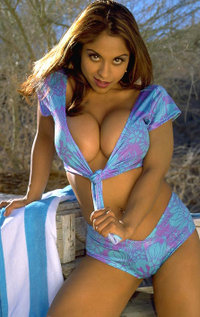 (img taken from her Wikipedia entry, not from my “personal stash”, you perv)
This adult model took her own life in 2006:

Angela S. Dhingra (aka “Angela Devi”), 30 years of age, hanged
herself at the 7498 E. Christmas Cholla Dr. property that she had
occupied since January of this year. Her body was discovered by the
Scottsdale Police at approximately 10:15 A.M. The last known time
anyone spoke with her was the night before.

(From: http://answers.google.com/answers/threadview?id=717242)
Let’s see, implants, adult modeling, suicide? Not quite the glamorous life some would have us to believe.